In the girls race Kirsten Winter finished 19th in her first Chiltern League, a great start to her cross country career. Elliot Brookes continued his good form for the club in the U11 boys race, finishing 32nd.

We had a full team in the U13 girls race, Eleanor Young was first home, followed by Libby Walling, Ella Caldow and Amy Woolland, with the team finishing 9th overall.

There was a great turnout in the U13 boys race, with 9 boys running. Reuben Penny was our highest placed finisher, coming 32nd in a field of 75 runners, he was followed by Joel Crook, Seb Maule, Ed Faulkner, Adam Heywood, Louis Filer, Samuel Evans, Noah Brookes and Samuel MacRae. We had our first lost shoe of the day in this race with Louis completing the course half shod! The team finished 7th.

We also had a good turnout in the U15 girls team, with 7 girls racing and the team finishing 4th. There were some pre-race spike issues, but thankfully once the race was underway they managed to keep them onto the end. Evie Burton was the first girl home, followed by Ivy Uhart, Ellie Faulkner, Mae Burton, Iris Cooper, Lyla Griffin and Rose Uhart.

The U15 boys race was an exciting affair with Ibrahim Achchi (top image) going out hard at the start and holding his 4th place position for the whole race and managing to fight off a late challenge right up to the line. Casper Chillingworth managed to fix his spike problem from the previous week(!) and had a great run, finishing 14th. Daniel Cogan continued his return to fitness and finished strongly, definitely more to come from Dan this winter. The team finished 4th despite being a man down. 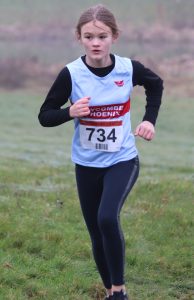 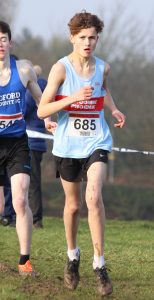 In the U17s/U20 women’s race Liv Brown ran another good race finishing 9th as she continues to build her endurance. Ellen Cooper was our second runner of the day to finish the race in her socks but still managed a good race on her favourite course!! Amy Hogbin, showed her speed with a strong finish and Mia Caddell started her return to fitness following illness. The team finished 3rd, their highest placed finish this season.

In the U17 men’s race, Rollo Parry returned to form finishing 4th and Finn Heron came in 24th our third runner of the day running with one shoe! Despite being two men short of a team, they still managed a 4th place finish!

Hopefully at the next race, there will be some double knots and maybe a bit of gaffer tape to keep those spikes on!

Campbell Park is a great and tough cross country course. Having raced well there the week before for the Bucks XC Champs, the small team of three WPH senior ladies went into match 4 feeling confident. Although we knew we were out of the running for a team medal, there was still points to be earned, and the potential to get into contention for individual medals.

The two lap race started well for all three ladies, with Ana Montgomery sticking with the lead pack and Jenny Roberts not far behind her. Rosie Jones, in only her second cross country, was looking strong and in good form.

However, during lap two things didn’t go so well for Jenny Roberts who unfortunately had to drop out with a calf injury. Ana Montgomery battled on to finish a fantastic 6th in Division 1, despite having ‘wobbly legs’ by the time she’d reached the top of the hill for the second time. A great effort! And Rosie Jones continued to have a brilliant run coming in in 34th place – 14 places up on last time. A huge improvement.

With only one match left we’re in 7th place but will still do our best to field a full team for match 5 in February!

Well done to all the Senior Men who took part in 4th installment of this years’ Chiltern League. Campbell Park is one of the shorter courses in a little under 5 miles, but it is also one of the most challenging races of the winter season. The men’s squad was a strong one with 15 Senior Men lining up to take on the course. Rob Wright was again, first home for the club finishing an incredible 11th overall. Rob was followed home by the ever-impressive Liam Busby in 23rd, Dean Childs in 56th, Rohit Patel in 64th (off the back of some incredible marathon miles!), Kieran Gilfedder in 88th, Tim Hogbin in 125th, Frank Fulcher in 127th, Grant Bateman in 138th, Clark Schofield in 170th, closely followed by Simon Hart in 176th. Shaun Chillingworth came home in 222nd, Mike Taylor finished in 282nd, Ben Wise finished in 292nd and Jeremy Mitchell brought the team home in 344th.

After this fourth installment of the Chiltern League, with one race left, the Wycombe Phoenix Men lie in 4th Position overall. A big push in the final race will be needed by all in the Senior Men Squad if they are to claim 3rd place. 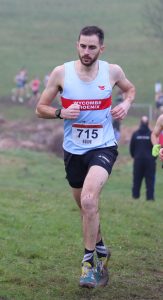