Another unseasonably warm day and another successful outing for Wycombe Phoenix Harriers at the South of England Cross Country Relays.

Following our ladies brilliant medal in the South of England road relays, hopes were high for the cross country equivalent at Wormwood Scrubs on Saturday. 3x3km meant for a short but exciting event. We decided to stay with Zoe Doyle on leg 1. Zoe’s had a great year and is running better than ever. She might not have felt 100% but she moved through the field to finish 3rd. A medal was definitely a possibility again. Next up was the incredibly versatile Alex Cook. Not many can mix ultra races and a 3km cross country but Alex is enjoying the Club competitions and held onto our 3rd position. Alex and Zoe had run great but we still found ourselves over 30secs off the lead.
Belgrave though had top loaded their team and were soon being hunted down by Pippa Woolven.  6mins into the final leg and we’d gone into the lead! Herne Hill were moving rapidly through the field but there was no way that their star Katie Snowden could catch ours and in the end we were comfortable winners. We think a first senior championship for the Club in its history. Such is strength of our ladies team at the moment, that we had hoped to field a 2nd team. Come Saturday we didn’t have a full team but Jenny Roberts and Beth Brown had very good runs nevertheless.

Despite the this year’s race coinciding with the start of half-term we also managed to enter a total of 6 junior teams. The day’s racing kicked off with the U17 women. We were delighted to have Siân Vico making a special guest appearance from the Sprints group and she showed her versatility by running the pressured first leg to hand over to Mia Waterhouse who ran a solid second leg to set up Cerys Vico who brought the team home in 21st place. We once again managed to get together two under 13 Girls teams and an U13 boys team, some of whom had run at the Road Relays and were now becoming accustomed to the excitement of this sort of racing. The teams were; U13G A (27th) – Amy Hogbin, Thea Gray, Emma Caddell. U13G B (34th) – Izzie Binnie, Iris Cooper, Ellie Faulkner. U13B (26th) – William Alexander, Jai Burmi, Ishi Burmi.
The U15 girls team was the same as the team from the Road Relays and they are proving to be a good combination. Maddie Wood led the team out in what was a packed start and used her experience to work through the melee. Ellen Cooper, who is improving each time she competes, ran a great second leg and Olivia Brown wrapped things up with a very determined final leg to finish 18th. The U15 boys went one better coming 17th. The Mitchell brothers (Nick and then Alex), who are both coming into a bit of form, covered the first and second legs and put the team into a good position to hand over to Rollo Parry, who made up a significant number of places, finishing strongly.
Some of the juniors stayed around to watch the senior women’s race, as there was talk of the possibility of medals beforehand. They weren’t left disappointed and hopefully will take away some inspiration from this gold medal winning success. 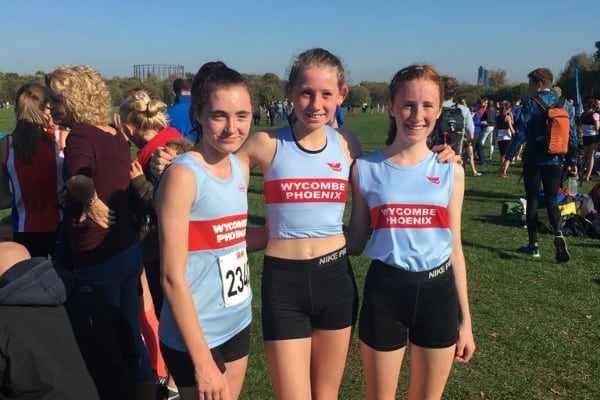 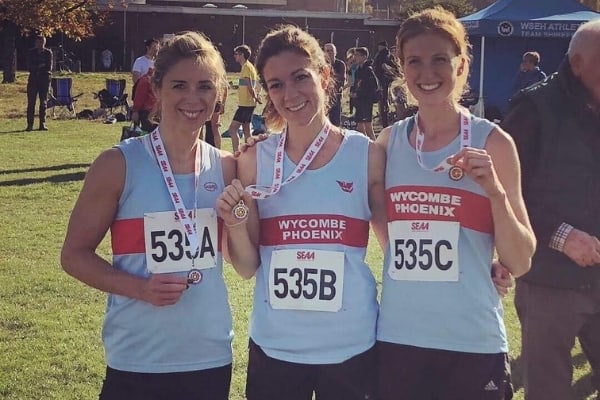