The Chiltern League at Luton was a cold and windswept affair. Duncan Griffin managed to pitch the tent in the best location possible, which meant the squads could find some shelter from the wind. The course is mostly flat, run around the edge of fields and very exposed to conditions, but at least this year it wasn’t particularly muddy.

The numbers in the junior squads were well down due to a combination of a clash with the final of the schools cross country cup, Covid and various other illnesses.
We had no boys in the U17 or under 15 age groups (both badly hit by illness and the schools cup). However, we had a good turnout in the U13 boys team, with Ed Faulkner leading the boys home followed by Joel Crook, Adam Heywood, Mikey Charter O’Connor, Samuel MacRae and Samuel Evans.
Well done boys!

In the U17 women Liv Brown finished in 10th (Div1) followed by Mia Caddell, Tilly Firth, Amy Hogbin and Sophie Thomas who all finished within 15 seconds of each other!
There was a good turnout in the U15 girls with a total of 7 girls running for the club. Evie Burton finished 8th (Div1), followed by Ivy Uhart, Ellie Faulkner, Mae Burton, Iris Cooper, Lyla Griffin and Rose Uhart.
In the U13 girls we had two brave runners Libby Walling and Ella Caldow, who battled through the elements, well done girls. Hopefully we will be in much stronger position for the next match in the new year. 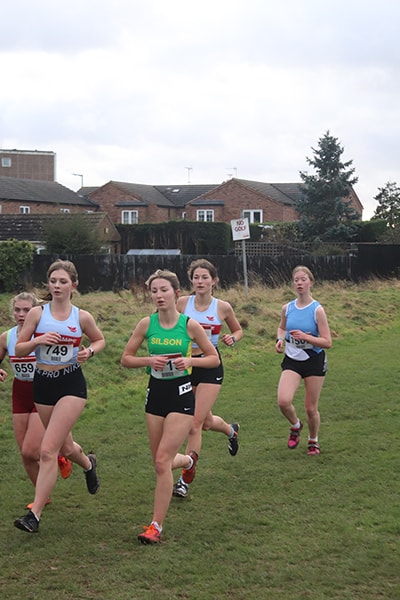 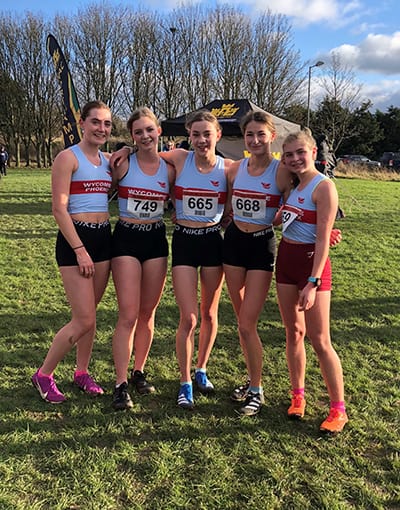 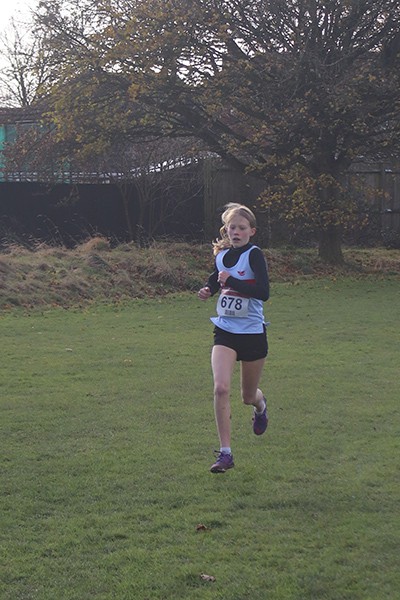 The mens team was strong as ever with a huge 16 man team, taking on 3 laps of the common coming in just shy of 10km. Stopsley Common is an exposed course and can often mean that the athletes run into a strong headwind and this years race was no different. The team ran hard to ensure we are still in the hunt for medals at the end of the season.
First home on his debut for the club and debut on the mud was Harry Anderson-Chapman. Harry’s impressive debut saw him finish 10th overall in a fantastic time of 34:40. Harry was in and around some fantastic athletes and I’m sure he will have the top 10 in his sights come the next round. Next home was the ever-reliable Rob Wright. Rob is having a fantastic XC season and is going from strength to strength. Rob finished in 15th overall in the mob match. Next home for the club was Liam Busby, Liam battled around the course to finish in 44th position. 6 seconds behind Liam was Dean Childs. Dean like many of the senior men is having a fantastic XC season and continues to score valuable points for the team. Dean finished in 47th position in the mob match. Next home for the club was Kieran Gilfedder. Kieran shot out of the traps and showed us all why he is a 15-minute 5k man on the track, giving many an athlete a clean pair of heels. Kieran finished in 57th position and continues to get stronger as the season progresses, well done Kieran. Next home was Sean Wilson, 6 seconds behind Kieran. Matt Brown continues to perform well over the XC and will surely be an asset to the club at the South of England XC Championships in the new year. Matt finished strong, completing the course in 38:59 for 76th Position. Everyone that knows Joe Branch knows his love for the mud. Unfortunately, Luton was dry as a bone but this didn’t stop Joe progressing with every round of the XC. Joe finished in 40 minutes exactly for 94th place overall. It’s great to see the strength in depth we now have in the squad, with new members joining and racing for the club. Luton was also Grant Bateman’s debut. Gran ran a fantastic race and appeared to enjoy himself even in the windy and cold conditions, finishing in 105th place overall. I’m sure this is a nice mark in the sand which Grant can use as a target in the next round. It’s not all about new members, Mr Wycombe himself Tim Hogbin continues to put in great performance over the XC finishing in 10th position overall. Frank Fulcher was next home, two places after Tim in 111th position followed by Clark Schofield in 137th position. Clark is such a positive influence around the club and ahead of races. I know I speak for all the members when I say his analysis of the XC stats is becoming legendary. Simon Hart clearly enjoyed his last experience of XC and was ready to don his spikes again, completing the Luton course in 42:46 for 176th position overall, well done Simon. Mike Taylor was next home for the club in 266th position, followed closely by Paul Burton 268th position. This looks like it could be a good battle over the next two races. I wonder if a little wager could make this interesting for the two athletes?! Marcus Faulkner brough the team home with a solid run finishing in 306th position.
Performance of the day is split between Harry for his fantastic debut cracking the top 10 and Kieran for his fantastic run and brilliant progression over the course of the XC season. Well done chaps! 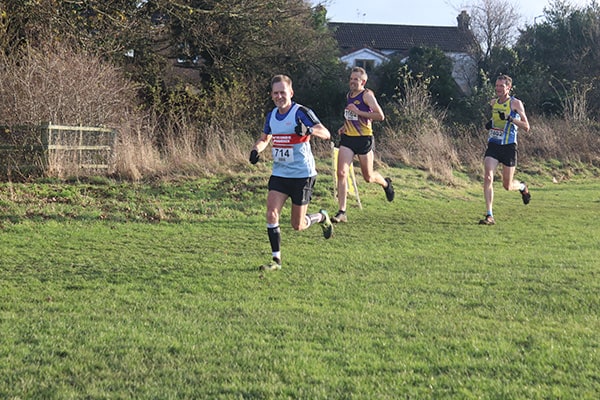 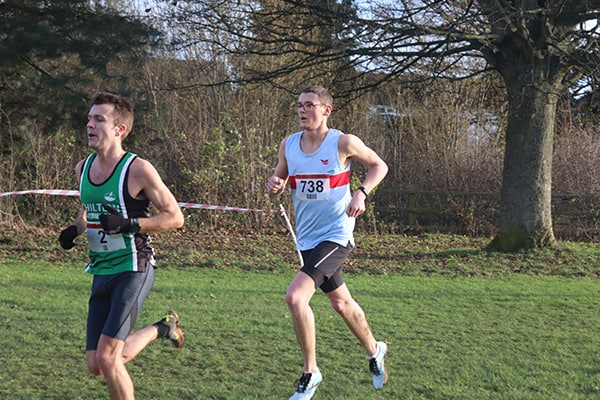 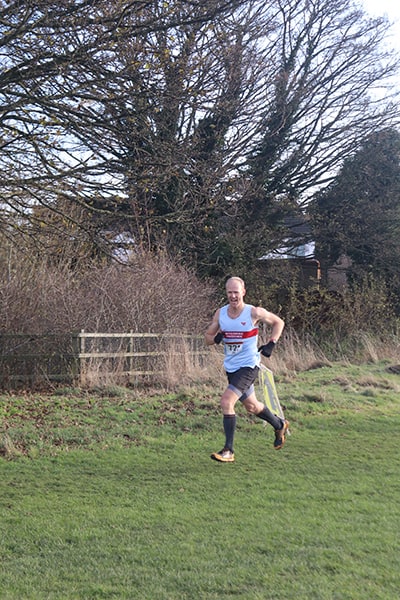 A very windy Stopsley Common was the venue for match 3 of the Chiltern League. Having won the 2nd match, the WPH Senior Women were hoping to move into 1st place in the league. However, unfortunately we were only able to field three runners on the day making moving up very unlikely. Not to be down-heartened the small team all ran superbly!

First home for the team was Ana Montgomery with another strong run to finish one better than last time and with another best performance in 4th place. Next in was Jenny Roberts. She had a great run too finishing in 8th place – equalling her best Chiltern League result from 2019. And, making it three out of three, Melanie Phair also had her best Chiltern League result to date rounding the team off in 10th place.

All three ladies couldn’t have done any more but only having half a team means that we’ve dropped to 4th place in the league, and will need every point we can get to get ourselves back into a medal position. 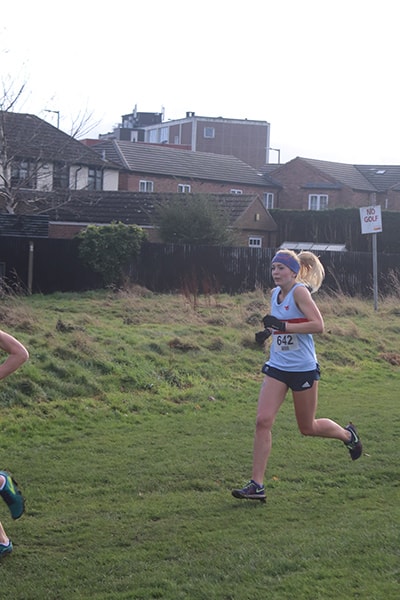 A fantastic day of racing was had and another event where the Wycombe as a whole showed excellent determination and team spirit and despite being shorter on numbers for Juniors and Snr Women great performances were still made. Next up we have two hilly courses in Campbell Park and Shuttleworth, these are as Senior Mens team Captain Sean Wilson would say, “proper XC courses”.