Wycombe Phoenix had a fantastic day out at Luton on Saturday. It was one of the best ever overall performance by the senior section of the club. There were some awesome performances, everyone had a good run. The conditions were good a bit windy on the open ground but not wet or cold and the ground was good going. The course changed from previous years and no longer had the hill up to the finish. I think judging by the terrific performances It seemed to suit most of us. It was exciting to watch a break through performance by Kieran looking strong all the way to come 8th his best performance in the Chiltern League. 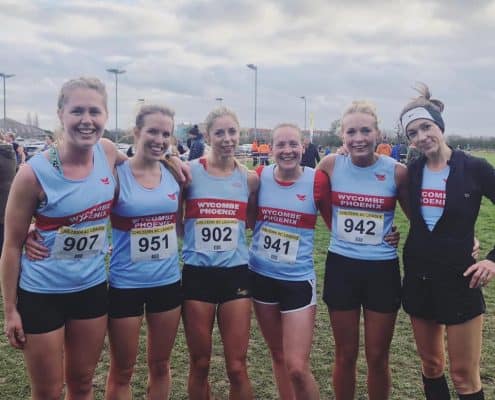 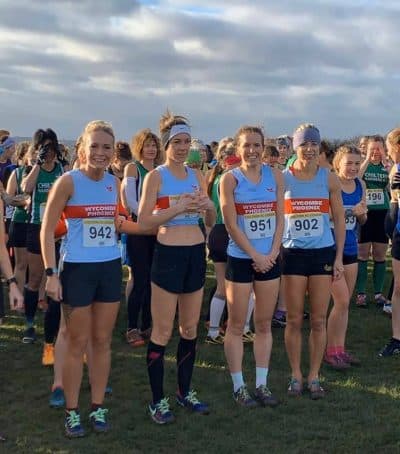 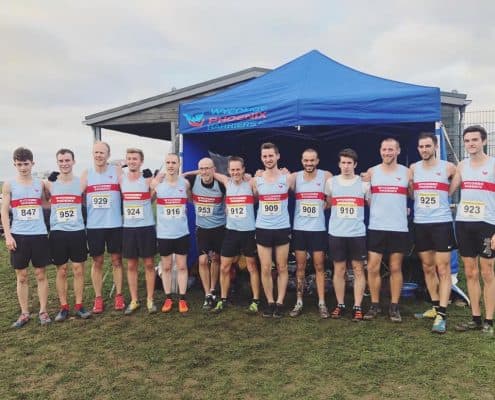 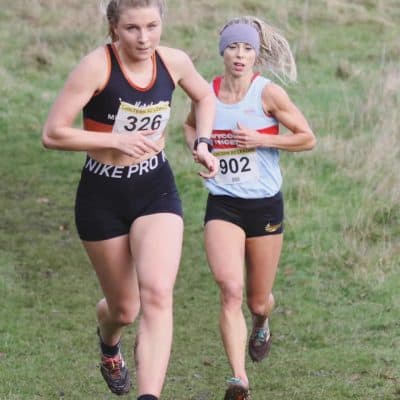 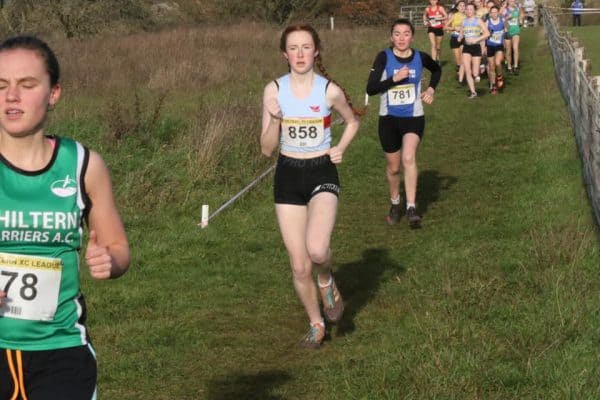 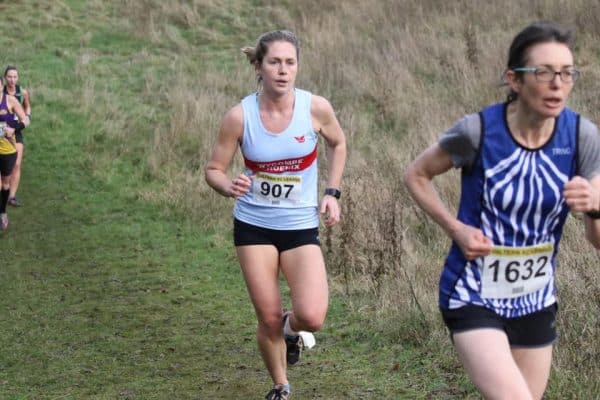 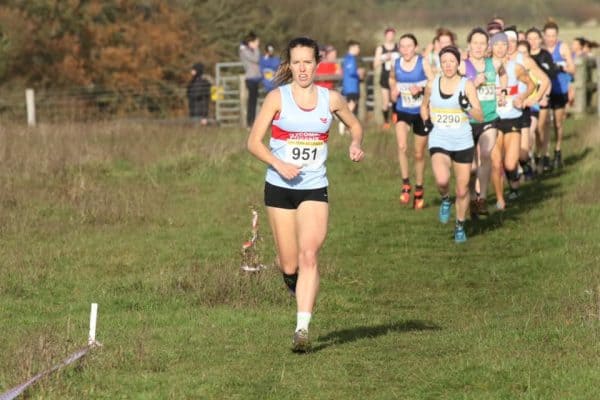 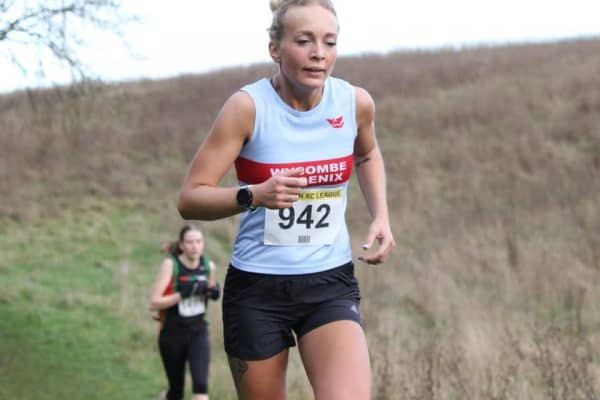 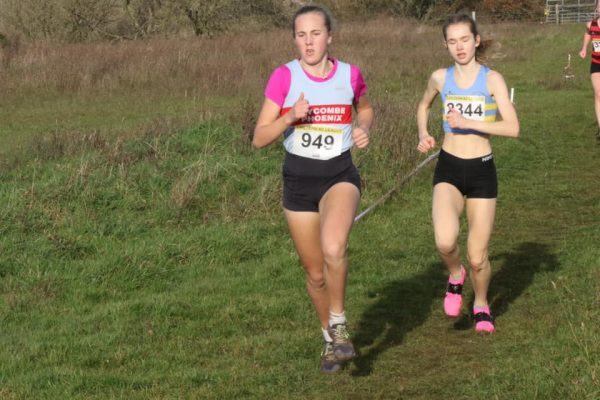 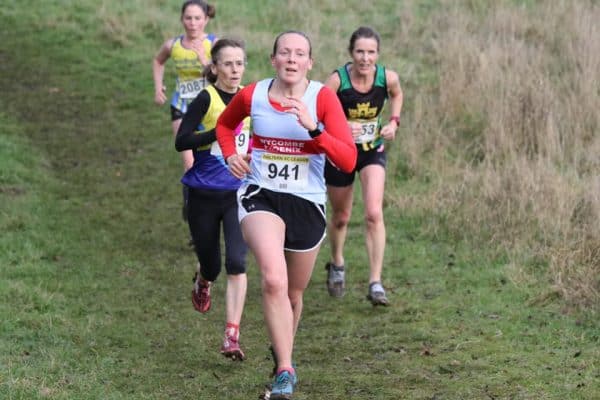 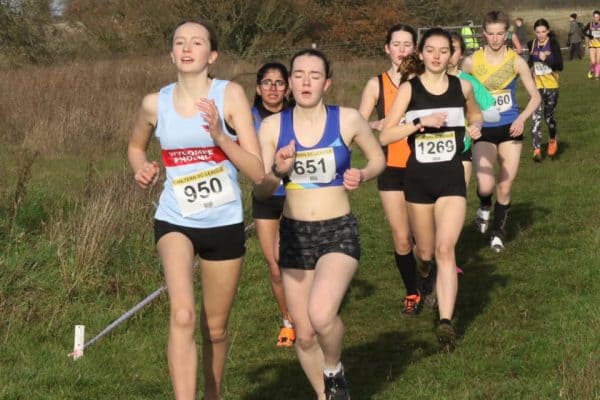 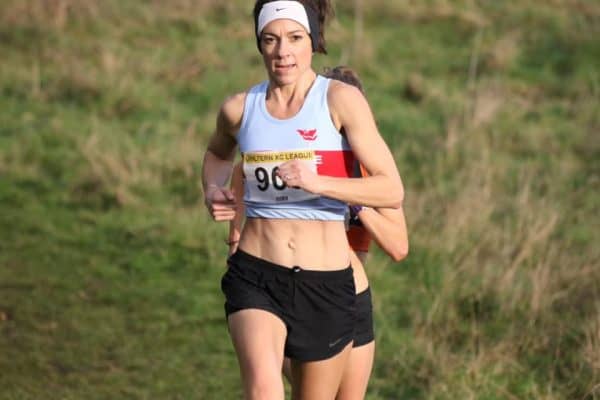 Melanie Wilkins led the field from the gun. After the first small lap I moved up the field into third. I continued to battle Elle Roche. I tried to kick past her up the incline possibly too soon and finished 2 seconds behind in third position. It was my best ever cross country league finish. Melanie increased her lead on the second half of the last lap and won very comfortably. Alex ran a very sensible paced race and finished strongly to overtake several runners to come in fourth. Next was Melanie Phair with a brilliant run for 33rd. Always giving 100% her legs looking tired but she battled on until the finish. Mel has made huge progress in fitness and racing so far this season. Hannah has had disrupted training with minor surgery then an ankle injury. Lacking a bit of fitness but still running well she finished 5th scorer in 50th. Karen who is improving all the time 6th scorer in 58th. Improving on her 65th finish from match 2. Well done Ladies great team work to continue our lead.
1. Melanie Wilkins 20.18 Wycombe Phoenix, 2. Elle Roche 20.39 Marshall Milton Keynes AC, 3. Zoe Doyle 20.41 Wycombe, 4. Alexandra Cook 21.00 Wycombe, 33. Melanie Phair 23.32 Wycombe, 50. Hannah Lowther 24.21 Wycombe, 58. Karen Foxwell-Moss 24.37

Kirsten running very well led the first lap but had Jasmine Young for competition sitting in until she took the lead during the second lap. It was a long 5k course for the under 17/20 women. Kirsten finishing in second. The first three were all under 17’s. The next Wycombe scorer in 12th overall was Ellen. She ran well but told me she prefers courses with hills. Mia Caddell third scorer in 29th and Rebecca? (The numbers got mixed up so this has not been corrected yet on the results) fourth scorer in 41st. Wycombe were missing a couple of girls from the last fixture.
1. Jasmine Young 18.33 Windsor slough Etonian and Hounslow, 2. Kirsten Stilwell 18.55 Wycombe Phoenix, 3. Katie Clutterback 19.27 Windsor Slough Eton and Hounslow, 12. Ellen Cooper 21.00, 29. Mia Caddell 22.59 Wycombe, 41. Rebecca Rees-Davies 24.25 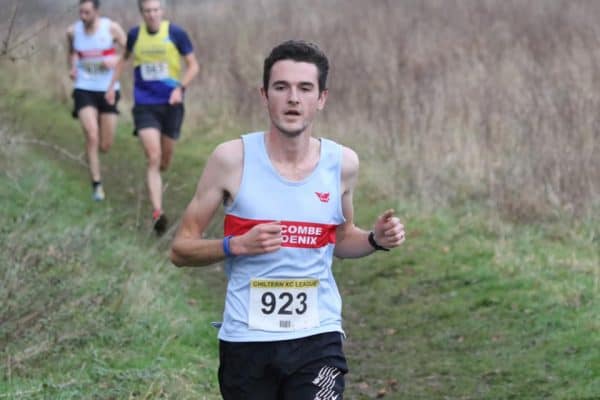 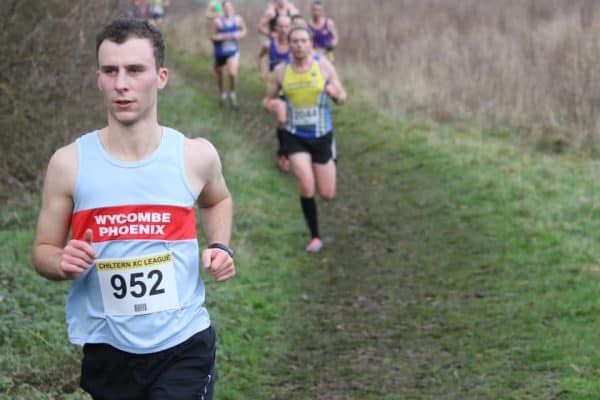 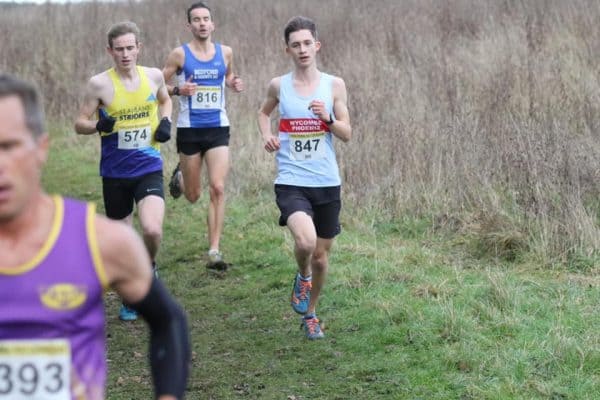 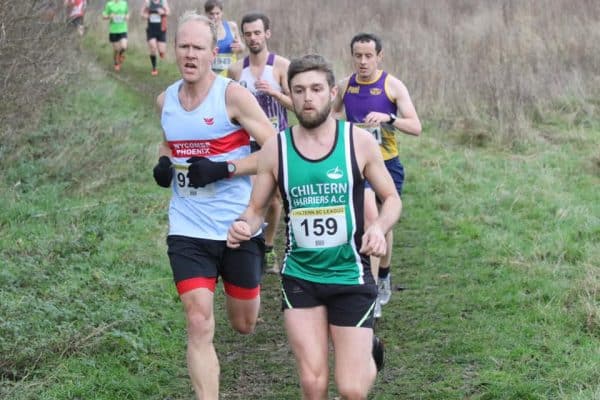 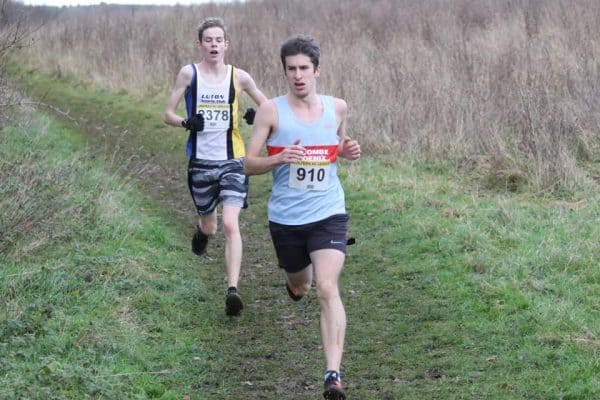 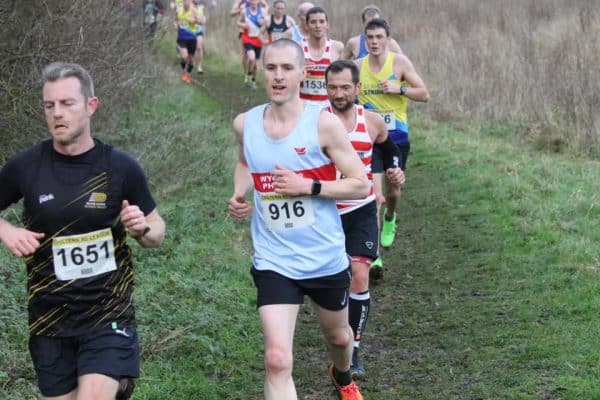 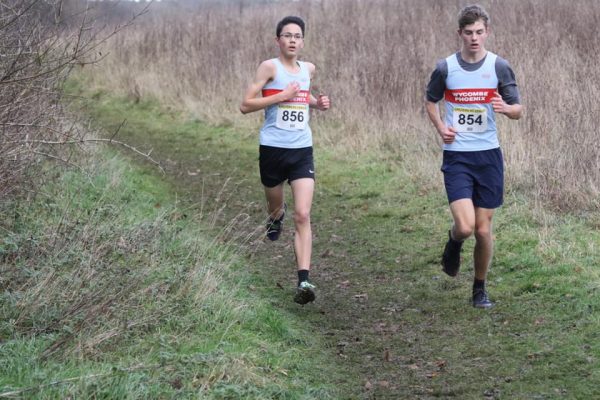 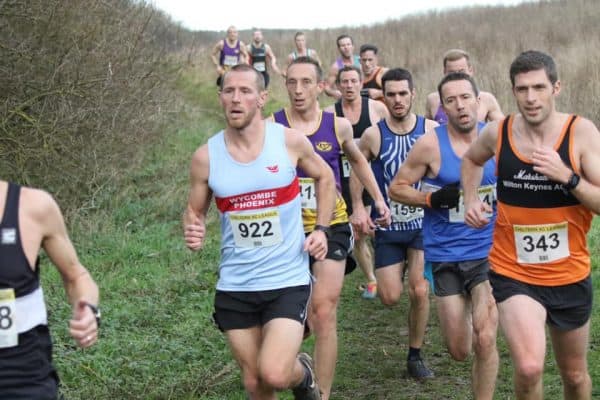 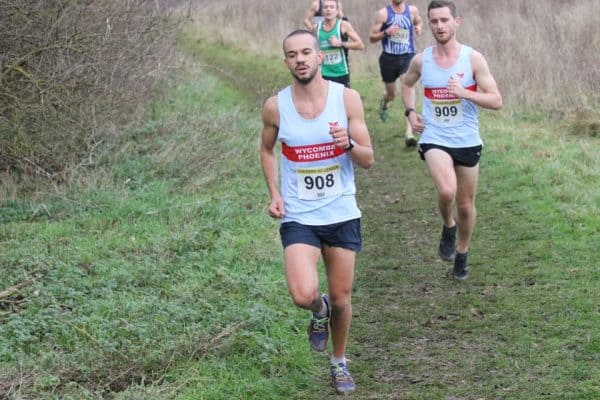 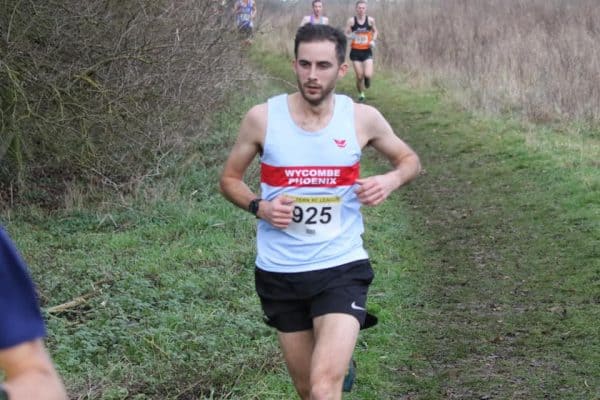 There were mixed feelings amongst the Senior Men’s team about the removal of a sizeable hill from the course, however the team were pleased to be facing less damp conditions than at the previous race at Milton Keynes. Nonetheless the team went and put in a strong team performance with a number of excellent individual performances throughout. First in for team was Kieran Gilfedder with his first ever top 10 position in a Chiltern League fixture for 8th place. He was followed closely by David Clark who ran a well judged race for 13th. Myles Caddell, the youngest member of the team, continued his strong start to life in the senior ranks of the league with a top 20 performance with 17th in Division 1. Joe Branch has had a delayed start to the season with this being his first league fixture, however he delivered with a strong performance with a 22nd place finish. Following on from his recent breakthrough half-marathon having 1 hour 16 mins, Liam Busby continued his fine form with a 28th place, continuing to build well in his first cross country season with Wycombe. Next up was another one in his first cross country season with Wycombe, Rob Wright who added to previous performances with 31st. Dean Childs looks to be building some momentum and performed well with a 61st place finish. Olly Kidd finished closely in 62nd, another one starting to build some momentum in to the season, although will of course be looking forward to a more hilly course. After a break from racing, Frank Fulcher returned to the fray with a 71st place, bringing in much needed points for the team. To round of the scoring 10, one of our newest members, Clark Schofield, had another strong run for 89th place. It was good to see James Robert’s back in the team with a 115th place, hopefully he’ll be back for more soon. Next up was Scott Wixon-Nelson with a 125th place, continuing to improve at an impressive rate and may well start to feature higher up in the field in future fixtures. Rounding off the team was another one of our regulars, Mike Taylor, in 174th place. Overall the team was 3rd on the day and now sit in 3rd place in Division 1.

32. Aaron Phillips 23.00, 33. Nicholas Mitchell 23.08
It was unfortunately a poor turnout in the lower age groups this week, it shouldn’t detract from the fine runs of those who did make the effort. From my Foundation Squad 3 athletes ran in both the U11 girls and boys races.
Lili Rowlands continued her great start to racing with an impressive 36th place in 9:30, followed by another great run from Libby Walling in 45th place, just 15 seconds behind in 9:45. 3rd home from the squad was Alba Buron in 59th place in 10:34, another great run from Alba who continues to improve and impress with every race.
For the boys, Seb Maule ran excellently to place 31st in 8:18, followed by Joel Crook in 49th place, 9:03. Edward Faulkner was next running 9:13 for 54th place, which is a massive improvement from the same race last year when he ran 11:10! Wow, well done Ed! 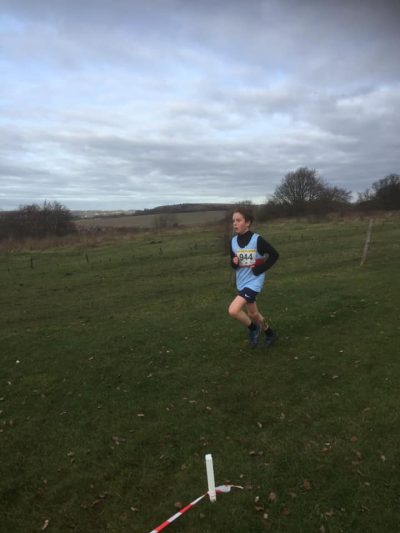 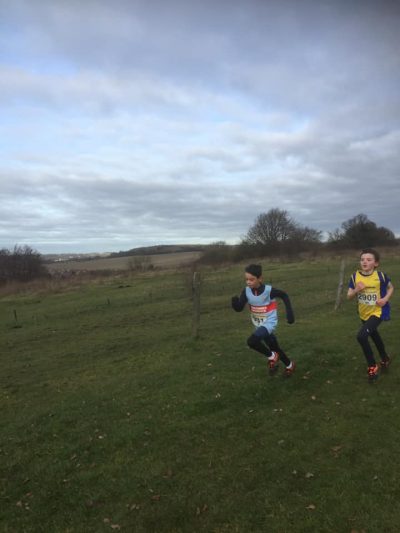 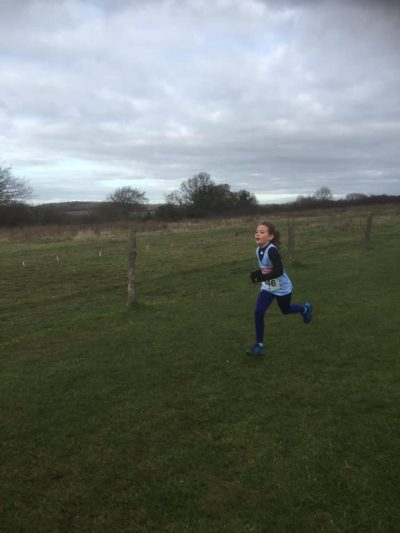 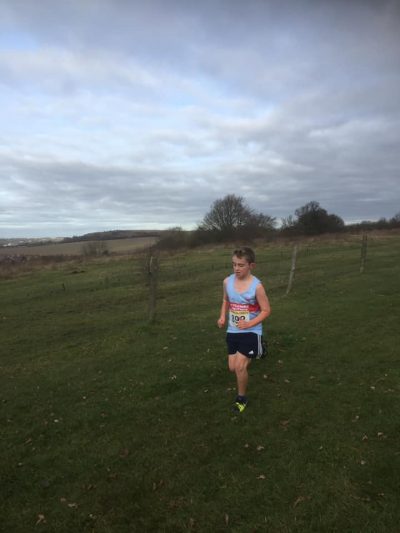 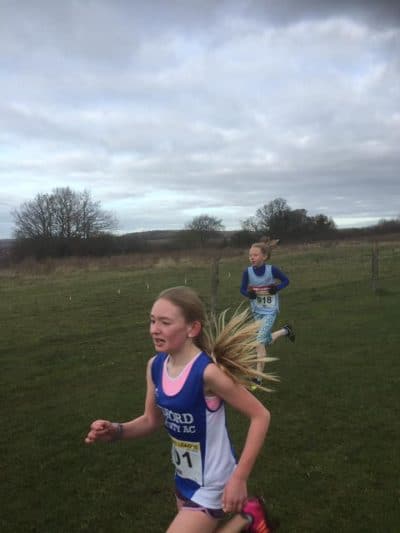 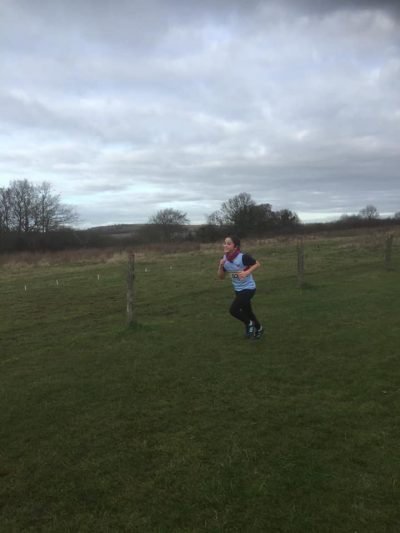 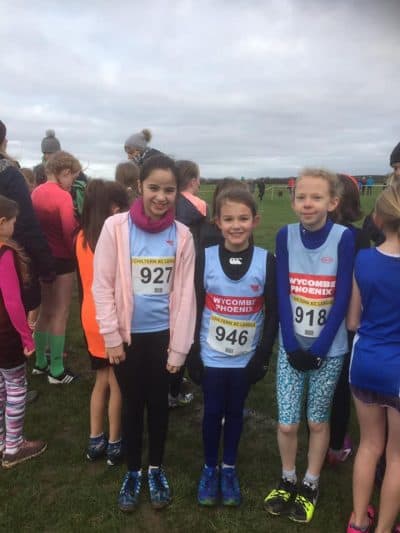 So whilst I agree with Zoe’s senior race report from this weeks Chiltern League Cross Country at Luton, in that it was unfortunately a poor turnout in the lower age groups this week, it shouldn’t detract from the fine runs of those who did make the effort. From my Foundation Squad 3 athletes ran in both the U11 girls and boys races.

For the boys, Seb Maule ran excellently to place 31st in 8:18, followed by Joel Crook in 49th place, 9:03. Edward Faulkner was next running 9:13 for 54th place, which is a massive improvement from the same race last year when he ran 11:10! Wow, well done Ed!
Congratulations to you all for your efforts and contributing to the WPH team. See you all again for the next fixture in Bedford on 11 Jan 20 and the infamous water!